You do not see a lot of writing in Amharic on display in in schools. When you see it not merely on display, but as a permanent sign to indicate that you are in the library, you get a clear sense Abingdon Primary School in Middlesbrough means it when it says bilingualism is a strength. 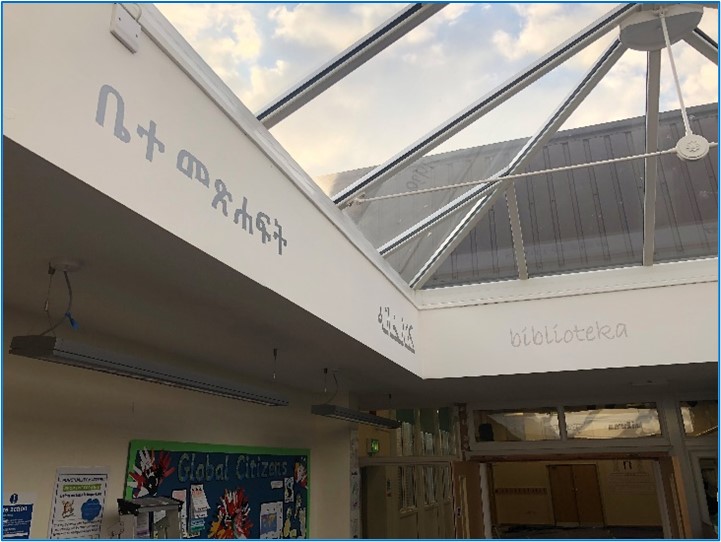 Abingdon has been recognised a School of Sanctuary for its inclusive welcome and support for children and families fleeing danger in their own country and looking for a space of safety. It builds productive relationships with hard to reach communities such as Romanian Roma, who have little prior positive experience if schooling.

The school is very clear about what it does and why it does it. So, a Bangladeshi new arrival with very little English, but four years of successful schooling in Italy, has very different support to a seven-year-old Roma who has not been to school at all.

The school’s EAL Co-ordinator has SLE status and leads work on international new arrivals and building relationships with communities, but with 91% of children learning English as an additional language, EAL provision is everybody’s job. It is a school in which SLT lesson observations focus on support for advanced EAL learners as well as pupils those who are new to English. That is very important in a school where 25% of pupils are of Pakistani heritage.

We do not give Gold Awards away. We ask hard questions about attainment, even when, as is the case at Abingdon, around half the pupils have free school meals and local residents are half as likely as the nation as a whole to have graduate level qualifications. The published 2019 data tell us that 51% of Abingdon’s EAL pupils in Year 6 reached the expected standard in reading, writing and maths, while nationally 66% of EAL pupils did. I asked why the gap was so big. I was expecting to be told that in 2020 the results had got better and they had. I was not expecting to learn that that there had been 162 different pupils in that cohort during its time in the school and that only 34 of the final 91 had started in Reception. Mobility is sometimes an overused word. At Abingdon, mobility is a fact of life and one with which the school copes commendably because it believes, in very practical ways, in the potential of all its pupils.

Find out more about the EAL Quality Mark
Want to know more?