First of all, there has to be a health warning. EAL census data is harder to make sense of now than it used to be.  In 2018 for the first time it included under fives and over sixteens. Not all under fives or over sixteens are at a school. A seventeen year old at an FE college a or a four year old in a voluntary setting is not captured in these data sets. We also know that some schools are better at collecting EAL data accurately than others.

The headlines, however, are that the 2019 school census shows an overall increase of around 25,000 pupils with EAL to just under 1.6 million or 19% of all pupils, with secondary numbers rising by more than primary for the first time ever. There is also the first ever small decline in the rate of increase in EAL numbers. This is evident particularly in primary schools and in Inner London, where some authorities have seen a small overall decline in the number of EAL pupils and most a decline in EAL pupils as a proportion of the school population. The biggest increases are smaller than last year and in unexpected places. There are, nonetheless, big increases in numbers in some places. Figure 1 shows us the top ten increases.  Unsurprisingly, four of the largest 20 local authorities in the country appear. 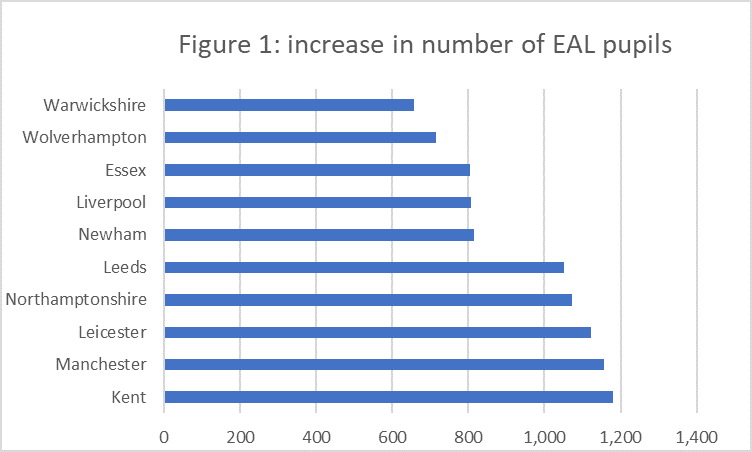 When we look at increases in terms of percentage point increase in Figure 2, only three of the numerical top ten appear and Barnsley, somewhat to my surprise, tops the table. 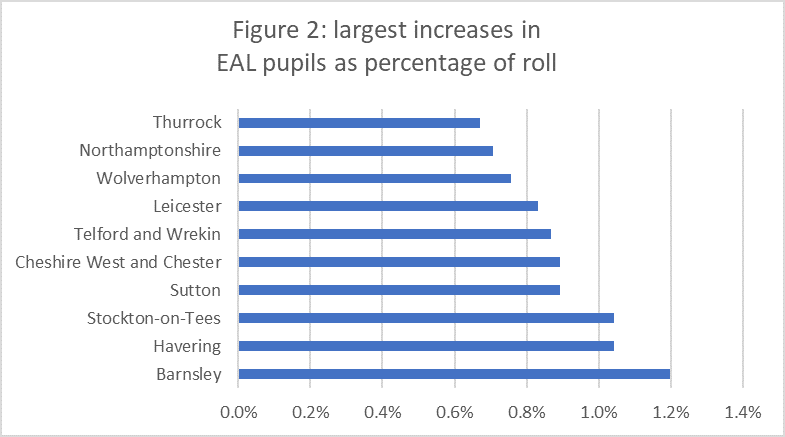 If you want to know more about EAL numbers in your area, book a place on our data course in March 2020.